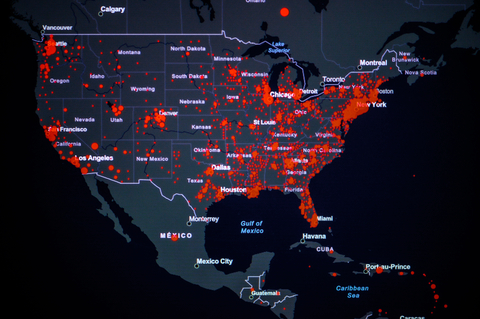 The US has surpassed 100,000 COVID-19 cases in a single day, with new infections reaching 107,872 on Wednesday, according to data released by Johns Hopkins University. The total rose from 91,350 cases on Tuesday and surpasses Friday’s one-day record of 99,321.

The virus surge is raising hospitalization rates across the country, with the most marked spikes being documented in the Southwest and Midwest. According to officials, Iowa and Missouri could soon reach full hospital bed capacity, where healthcare facilities and front-line workers are becoming increasingly overwhelmed by the influx.

The US has one of the highest coronavirus infection rates in the world with 9.58 million cases and 234,000 deaths to date. What health experts predicted weeks ago appears to be manifesting as colder weather and more time spent indoors sets in. They do not attribute the spikes to increased testing, which has expanded by less than 5% in the past week.