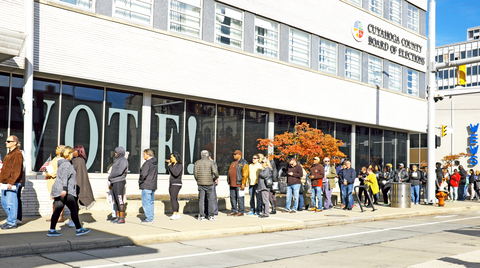 Nearly 99 million primarily Democratic voters heeded the advice to cast their ballot early in an unprecedented election year wrought by a pandemic, social unrest, and a political season unlike any other. Turnout at the polls is expected to be high with Republicans comprising a large share of in-person ballot casting on Election Day. Early Tuesday morning voters lined up to make their choices at polling locations across the country, including the highly contested battleground states.

Election officials are advising results could take days or longer due to an extraordinary number of mail-in ballots to be counted. Although news networks may be quick to report projected winners, experts are pointing out the official count will take longer than usual and are calling for tolerance with the process. Legally, states have until December 8 to report their official tally, which is unusual but did occur in the 2000 presidential race.

Federal authorities are also cautioning the public to be skeptical of sensationalism and unverified claims as they contend with the potential for outside interference undermining the election. Although no credible threats have been reported, the US Cybersecurity and Infrastructure Security Agency director, Christopher Krebs asked “all Americans to be patient.”

In the lead up to Tuesday, both President Donald Trump and Democratic candidate Joe Biden finalized their pitches to win over voters in key states central to their campaigns. Florida, Ohio and North Carolina could very well decide who will be president for the next four years. According to Frank Lutz, longtime political analyst and GOP pollster, Joe Biden, who maintains narrow leads in North Carolina and Florida, needs to win only one of those three key states to become the 46th President of the United States. Donald Trump will need to win all three of those critical key states in order to be re-elected.