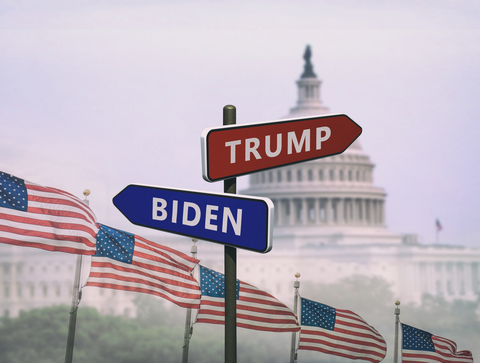 What was originally scheduled to be a televised presidential debate turned into competing town hall meetings airing at the same time on rival networks on Thursday night. During the broadcasts, President Donald Trump and Democratic candidate, former Vice President Joe Biden, exemplified the stark differences between them in both views and temperament.

Trump, who was moderated by ABC’s Savannah Guthrie, was testy and combative at times, repeating himself and evading questions, such as if he took a COVID-19 test prior to the first presidential debate two weeks ago. Trump responded he didn’t know, repeatedly stating he takes a lot of tests, but not every day. He also took a defensive posture when questioned about his administration’s response to the pandemic, steering the subject towards closing the country to outside travel at the end of January, and contradicting his stance on masks as he waffled between he’s okay with masks, to falsely claiming 85% of those who wear mask contract the coronavirus.

Trump also danced around the issue of his personal debt of over $400 million, saying he doesn’t think he owes money to any foreign entities or “sinister people,” and stated that amount was very small compared to his vast assets as a whole. When asked about an overdue economic stimulus bill, Trump criticized Nancy Pelosi for holding up approval, despite the fact he hasn’t spoken directly to the House Speaker for an entire year.

Joe Biden maintained a calm and respectful demeanor during the town hall in his home state of Pennsylvania with NBC moderator George Stephanopoulos, delivering a clear message on his plans to combat the pandemic with improved testing and expanded PPE for front line health care workers. He criticized the current administration’s handling of the crisis including bypassing an Obama-era pandemic preparedness plan by disbanding the Global Health Security and Biodefense unit established in 2015 under the Obama Administration. Biden also outlined his plan to eliminate fossil fuels over time, saying he’ll fund the scientists who have the technology for clean energy utilizing wind and solar power and described a small box sized battery which every household will eventually have as their energy source.

Biden also spoke of the core values he’s held since childhood that he believes everyone is equal and will implement policies which allow for fairness in all respects for people of color and transgender rights. Biden still isn’t crystal clear on his stance on fracking saying, if it’s done right without harming the environment, he won’t eliminate it. When asked about packing the Supreme Court, he said he will give his answer after the election. The integrity of Joe Biden really shined when he put on a mask and stayed 30-minutes beyond the town hall broadcast to speak with each attendee whose questions weren’t addressed during the one-hour televised meeting.

Trump and Biden are scheduled for their final debate, which will air live from Nashville next Thursday.