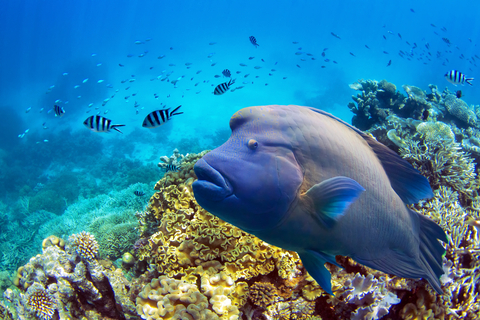 Rising ocean temperatures, which scientists attribute to an inequitable rise in greenhouse gas emissions, is causing Australia’s Great Barrier Reef to die a slow death. The world’s largest coral reef system, which provides a vast habitat for many types of fish and a variety of marine life, has seen an increase in coral destruction from an effect known as bleaching which is destroying the complex coral structures which fish and sea life depend upon for their natural habitat. When a habitat dies, the life it sustains dies with it. In March, scientists observed the reef had suffered a third mass bleaching in just five years. The full impact of the damage is currently under assessment by researchers.

Australia recently downgraded the overall health of the vital ecosystem to “very poor.” Bleaching happens when corals under environmental distress force out the algae which produces their beautiful natural colors. If the conditions return to normal, the coral can recover, although it takes decades to reverse the damage. A study conducted last year showed damaged colonies of various types of coral have been struggling to regenerate since the mature coral had completely died off. A vibrant coral community contains millions of young smaller corals as well as adult larger ones. The study also revealed the entire Great Barrier Reef’s former ability to recover is severely compromised due to fewer breeding adult corals and therefore considerably reduced amounts of baby corals, which they said is a result of global warming and environmental pollution.