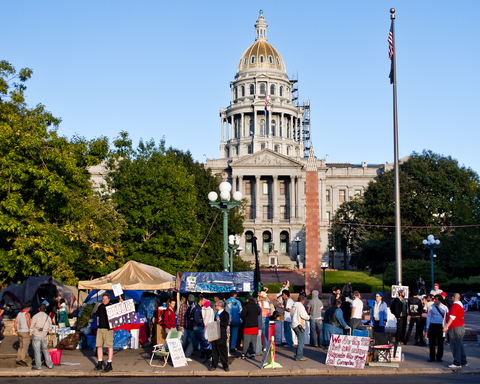 A 30-year old man who was allegedly hired as security detail for a local TV station during a rally in Denver was arrested on Saturday and charged with first-degree murder. Matthew Dolloff is suspected in the shooting death of 49-year-old Lee Keltner outside the Denver Art Museum and is currently being held without bail. Joe Montoya, Denver’s Chief of Investigations, said there was a verbal exchange which led to an altercation with a demonstrator, who struck Dolloff and sprayed pepper spray at him, to which Dolloff responded by opening fire and killing the protester.

The police chief stated the department was working to keep rival groups separate during the demonstrations, and this was the only arrest made. The shooting happened during a planned support rally for police where counter-demonstrators gathered without incident. Although Keltner was not officially identified, his son made a positive identification, saying his father was not associated with any group and had previously attended rallies in support of the police department.

Reportedly, Dolloff was not licensed to work as a security guard, although he was identified as one by local news station KUSA-9News, who stated it is a common practice nowadays for them to hire protection for their television crews. Operating as a security guard without a proper license is subject to up to a year imprisonment and/or a $999 fine. The station also faces possible fines for hiring an unlicensed security guard.