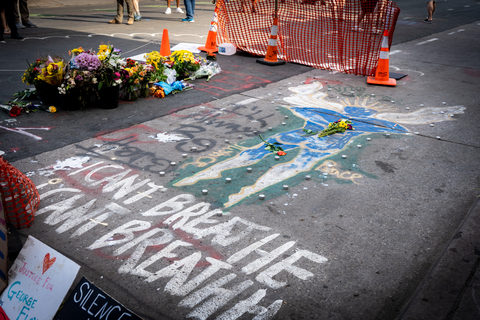 Former police officer Derek Chauvin, who was fired and charged with the choking death of George Floyd on May 25 in Minneapolis, was released from jail on a $1 million bond on Wednesday. Chauvin is facing second and third-degree murder charges as well as second-degree manslaughter in the killing of George Floyd, who was handcuffed and held in a choke hold as Chauvin knelt on his neck for 8 minutes and 46 seconds until he died. Three other officers who stood by and did nothing to intervene were also fired and face lesser charges of aiding and abetting second-degree murder and manslaughter.

The brutal killing was captured on video, shocking and outraging many into forming the Black Lives Matter movement, chanting Floyd’s agonizing words “I can’t breathe,” which mobilized nationally and gained support from around the world. Several hundred demonstrators took to the streets of Minneapolis upon hearing the news of Chauvin’s release and gathered for peaceful protests where George Floyd died, marching and chanting “no justice, no peace.” The governor deployed 275 officers from multiple agencies at the city’s request, who made nearly 50 arrests, some of which were for breaking the 10:30 pm curfew.

No details were released on who posted the bond, although reportedly Chauvin’s release is conditional. Chauvin is scheduled to appear in court on March 8. Next Wednesday, October 14, would have been George Floyd’s forty-seventh birthday.