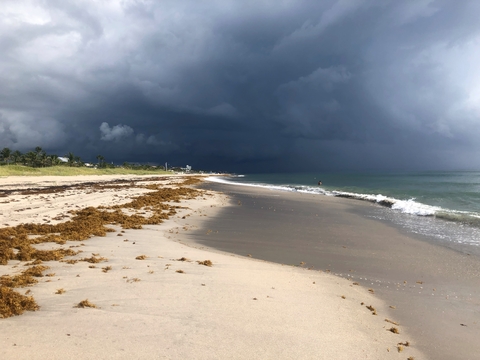 A tropical depression in the Caribbean Sea was upgraded to Tropical Storm Delta on Sunday as it intensified, posing a threat to Jamaica, the Cayman Islands and western parts of Cuba. Forecasters are predicting the storm has the potential to quickly strengthen as it approaches the United States and could rapidly turn into a hurricane as it brushes the western portion of Cuba by Tuesday, moving over warmer waters on its approach towards the US Gulf Coast.

Experts are concerned Delta could intersect with Tropical Storm Gamma, which brought torrential flooding to the Yucatan Peninsula in Mexico, for a long enough period of time between Tuesday and Wednesday to affect its path and intensity. Forecasts indicate the storm is on track to turn northeastward at some point, potentially impacting areas from the Florida Panhandle as far west as Galveston, Texas.

The exact point of landfall is currently unpredictable and will depend on wind direction and velocity as the storm system makes its approach across cooler upper gulf waters combining with higher winds. Forecast models indicate landfall will occur later in the week, possibly as high as a Category 2 hurricane. Gulf Coast residents are being advised to keep a close watch on storm updates as forecasts are likely to change frequently.

Despite the potential for cooler water temperatures to weaken the storms strength, it’s expected to bring dangerous conditions to areas along the Gulf which have already been pummeled by several intense storms so far this year.