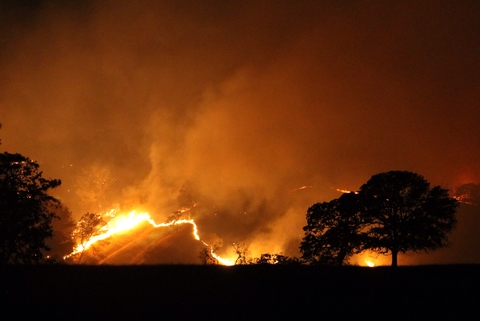 The season isn’t over for a fire-weary state that’s seen a record-breaking 4-million acres (6,250 square miles) of utter destruction so far this year. CalFire, California’s forestry and fire protection agency, said the mind-boggling “unfathomable” amount of damage is twice that of any other season and double the 2-million-acre wildfire record for a single year.

By Sunday, the state had reached over 8,200 fires, with more than 8,400 homes and buildings destroyed and 31 resident fatalities. With 23 major infernos still out of control, almost 17,000 firefighters continue to battle the historic blazes.

In Northern California, the Glass Fire is still wreaking havoc on the picturesque wine country counties of Napa and Sonoma and was only 17% contained after destroying nearly 100 square miles, forcing thousands to evacuate since it began on September 27.

Firefighters in Shasta County reported the Zogg Fire, which has destroyed nearly 90 square miles since it erupted a week ago, was almost 70% contained on Sunday.

The Complex Fire in Mendocino County, which began in August, has been burning for 6-weeks. By Sunday morning the largest fire in the state had destroyed 1,540 square miles (nearly 1-million acres), breaking the record for a single fire, and was around 51% contained after winds blew off a smoke cap on Saturday, allowing for more oxygen to fuel the ferocious flames.

Weather forecasters are predicting rain for parts of Northern California later this week. How much and where it will fall is uncertain. One thing is certain, everyone is hoping it will be enough to end this year’s season of unprecedented destruction.