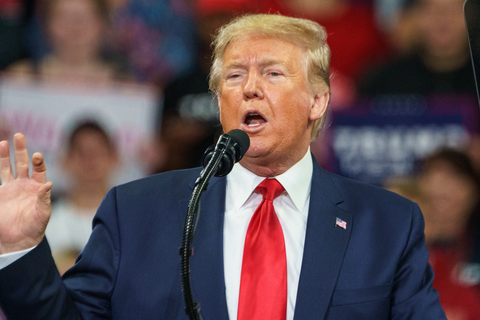 After months of publicly defying recommendations from his own leading health experts on the severity of the coronavirus dangers, President Trump announced early on Friday he and First Lady Melania Trump have tested positive for COVID-19. In an extraordinary development in the lead up to election day, Trump and his wife are now forced to quarantine and cancel upcoming campaign rallies and events.

The positive test results pose the single greatest health threat to a sitting president in recent history. Being 74 years old and considered obese at over 240 pounds, Trump is in the highest risk group for potentially serious complications from the deadly disease which has taken the lives of more than 1 million people around the world, including over 205,000 Americans.

During recent campaign rallies and fundraising events, the president continued to downplay the pandemic, criticize Democratic governors for shutdowns and say he still believes the end is in sight. Upon his return to the White House Thursday evening he didn’t seem to appear ill, although refrained from speaking to reporters as he entered his residence.

Following the announcement, Melania Trump tweeted that she and the president are “feeling good.” Trump later tweeted that he and Melania will begin the “quarantine and recovery process immediately.”

The president’s personal doctor, Naval Commander Dr. Sean Conley, issued a memo confirming the positive test results, saying the president and first lady will remain under close watch by leading medical experts during their convalescence, assuring that the president will remain fully capable of continuing to carry out his duties of office.

Early Thursday, Hope Hicks, a very close presidential aide, tested positive for the virus. President Trump has held rallies and events recently where social distancing and masks were not required, and general CDC guidelines frequently ignored, potentially exposing many in attendance to spreading the infection. After Tuesday’s disastrous presidential debate, doctors advised Joe Biden to get tested for COVID-19 after being in close proximity to Trump.

UPDATE:
Friday afternoon Joe Biden and his wife Jill both tested negative for the virus. Reportedly, Vice President Mike Pence also tested negative and assumed Trump’s role on a conference call with state governors. Although Republicans are trying to insist Biden suspend his campaign for 14 days, the Democratic candidate hit the campaign trail and headed to Michigan.