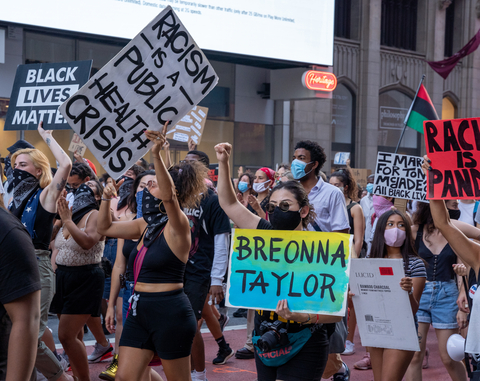 Protests erupted in cities across America on Wednesday following the announcement of a grand jury decision in the Breonna Taylor shooting death at the hands of police in Louisville, Kentucky, on March 13. Two Louisville officers were shot and injured during the demonstrations which turned violent in Taylor’s hometown.

Of the several officers involved in the shooting, only one was indicted – but the charges are not related to shooting Taylor. People from all walks of life, including celebrities and ordinary citizens, have been crying out for justice for Breonna Taylor, who was shot numerous times by a white officer while police burst into her apartment under a “no-knock” warrant issued during a drug investigation.

Daniel Cameron, who is Kentucky’s first Black Attorney General and a Republican, stated the officers had warned they were present prior to breaking down Taylor’s apartment door. The grand jury charged Officer Brett Hankison, who was removed from duty following the incident, with 3-counts of shooting into a next-door neighbor’s home and endangering those inside with blatant disregard for their safety.

Demonstrators took to the streets calling for justice for Taylor, an aspiring nurse, marching and chanting her name. Benjamin Crump, the family’s attorney who also represents other high-profile police brutality cases, including George Floyd, called the decision “outrageous and offensive.”

The FBI is currently conducting an active investigation into potential federal law violations regarding the police raid on Taylor’s apartment.