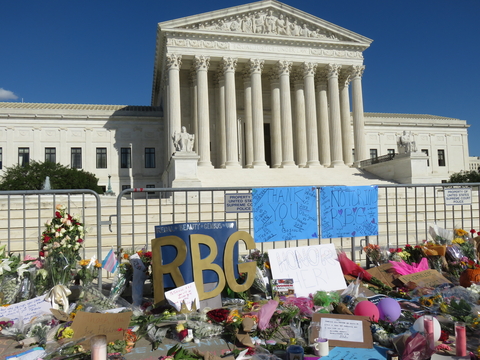 Justice Ruth Bader Ginsburg will be honored by thousands who are anticipated to attend a public viewing in Washington, DC, where the late champion for justice and equality will lie in state for two days. By early Wednesday morning hundreds had gathered outside the Supreme Court to pay their last respects to the historic justice who led the fight for gender equality and other important civil rights issues.

Inside the Supreme Court, Ginsburg’s eight colleagues gathered for the first time since March when the court was closed due to the pandemic, forcing them to meet via conference calls. Ginsburg’s casket arrived at 9:30 am, as her former law clerks lined the steps to view the flag-draped casket being carried into the Great Hall for a private ceremony where the justices were waiting. Outside the court, a sea of memorials filled with flowers, notes and tribute posters have been placed since her death on Friday to honor the distinguished advocate many affectionately came to know later in her career as “Notorious RBG.”

The casket will be placed on the Lincoln Catafalque in the Capitol Rotunda from Wednesday through Thursday – the very platform President Abraham Lincoln’s casket rested on in 1865 – accompanied by a portrait created by artist Constance P. Beaty in 2016. Justice Ginsburg is the first woman government official to lie in state in the Capitol Rotunda.