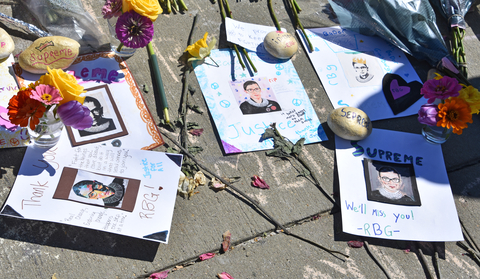 The US Supreme Court has, sadly, announced the passing of their prominent and iconic colleague, Justice Ruth Bader Ginsburg, who died on Friday at the age of 87 after serving 27 years, leaving an historic legacy and contentious vacancy in the country’s highest court.

Ginsburg had hoped to live long enough to serve until at least age 90. Shortly before passing away surrounded by family at home in Washington, D.C., Ginsburg dictated some final thoughts to her granddaughter, saying her “most fervent wish” is that she “not be replaced until a new president is installed.”

Justice Ginsburg, affectionately known as RBG by her adoring public, was a champion for gender equality and civil rights, leading the liberal wing of the Supreme Court. She was often the deciding vote in many highly debated cases, although sometimes voted conservatively. Her passing has cast a spotlight on the upcoming presidential election and the inevitable battle over who will replace her.

With the court about to begin a new term, Ginsburg’s absent deciding vote on important cases leaves a wide gap with room for conservatives to upend decisions regarding matters which were upheld by the court under her tireless effort, including not deporting “Dreamers,” supporting “Obamacare” and banning crowded church gatherings amid the coronavirus pandemic.

Public tributes and memorials poured out across the country over the weekend, including primarily conservative Chief Justice John Roberts, who stated, “our nation has just lost a justice of historic stature,” saying the court has “lost a cherished colleague” and Justice Ginsburg will be remembered as a “tireless and resolute champion of justice.”