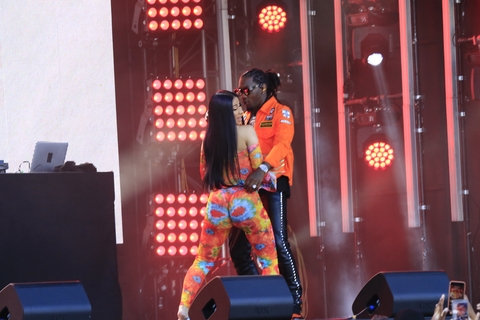 Female rapper Cardi B announced that she has filed for divorce from her husband hip-hop singer Offset, from the band Migos. The two were married in secret in 2017 and since then have also birthed a two-year-old daughter named Kulture.

Cardi is reportedly filing for primary custody of Kulture and has requested that Offset contribute for “support and maintenance.” In a statement Cardi said that the relationship between her and her husband was “irretrievably broken.” She also added that the two are living separately as of now and that she wishes for all assets to be split evenly between the two amid the divorce.

In December of 2018, Cardi reported the two had split due to rumors of Offset allegedly cheating. Offset responded by posting on his Instagram that he was sorry for being a “selfish, messed-up husband”, then took it a step further by publicly asking for forgiveness in front of the crowd at her Rolling Loud concert. Despite her fans disapproval, later that year Cardi stated that she wanted to work on their relationship in an interview with Cosmopolitan.

The two then decided to get back together and celebrated their second wedding anniversary last year as shown in a post on Cardi’s Instagram of the two captioned: “We keep learning and growing. That’s what marriage about.”

Regardless, the two have officially decided to call it quits as of Tuesday when the divorce papers were filed.