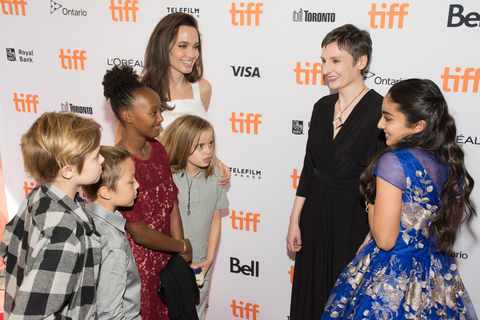 Two 6-year old best friends who live in east London set up a lemonade stand in their neighborhood to raise money and awareness for people suffering in Yemen. The country was already in a dire humanitarian crisis prior to the global pandemic, facing extreme poverty, hunger and malnutrition along with lacking health-care access amid a devastating and destructive civil war.

Angelina Jolie, who was a United Nations Goodwill Ambassador for Peace from 2001 to 2012, heard of the boys’ effort and decided to surprise them with an unexpected donation for their appropriately named “Lemonade for Yemen-Aid” stand.

The A-list movie star contributed an undisclosed amount to boost the efforts of the two friends, Mikaeel Ishaaq and Ayaan Moosa, who began their fundraising in August upon learning of the plight in Yemen, where 4-million people have been displaced as a result of the ongoing 5-year conflict. It’s estimated 80% of the 24 million population rely on humanitarian aid for basic survival. The two boys had initially raised nearly £5,000 British Pounds (equal to around $6,500 US).

Angelina Jolie sent the boys a personal note with her donation which read: “”Thank you for what you and your friends are doing to help children in Yemen. I’m sorry I am not able to buy a lemonade from you, but I would still like to make a donation to your stand.”

The boys posted a video holding the note, which went viral on Instagram, and along with the Hollywood attention Jolie created donations have reached £67,000. They have recently raised their target fundraising goal to £100,000. Global Citizen shared the story, praising the boys’ endeavor to raise funds and awareness for Yemen, calling it “so inspiring.”