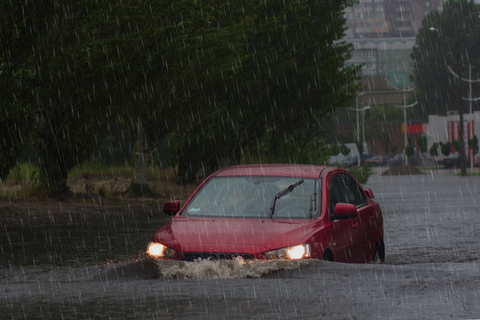 What was predicted to come ashore as a Category 1 on Tuesday, Hurricane Sally was upgraded to a Category 2 as it hit land with battering wind speeds as high as 105 mph. The massive storm is moving at a 3-mph crawling pace dumping up to 15-inches of rain in parts of the Florida Panhandle and Alabama. Sally had been predicted to make landfall on Tuesday as far west as the Louisiana-Mississippi border, but changed direction slightly to the east bringing a deluge of heavy rain and damaging winds as it moves inland.

Forecasters predicted on Wednesday the massive storm could potentially dump up to 35 inches of rain and isn’t going to end anytime soon. Pensacola, Florida, has seen as much as 30-inches of rain as roadways become rivers filled with dangerous debris. The violent storm is creating extremely hazardous conditions with over 500,000 power outages reported so far. A flash flood emergency declaration has been issued by the National Weather Service in Mobile, Alabama, who said the catastrophic flooding is a severe danger to human life. Officials are imploring residents to evacuate to higher ground immediately.

The storm’s crawling pace is expected to continue to pummel the area on Wednesday before moving towards Georgia and the Carolina’s, where heavy rains up to 12 inches are not expected to subside before the end of the week. Many lower lying areas along the Gulf Coast from Mississippi eastward are currently under mandatory evacuation orders.