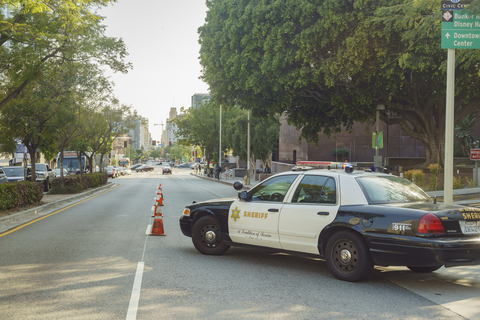 Two L.A. Sheriff’s Department Deputies were ambushed while parked in their patrol car on a street near the Metro railway station in Compton, California, around 7 pm on Saturday. An unidentified passerby, who seemed to just be walking past the car, suddenly turned and shot both officers, firing multiple rounds through the passenger side window. The unidentified gunman can be seen in a video still shot captured by a local security camera firing at the officers unprovoked.

Protesters gathered at the hospital where the officers were taken, blocking entrances and exits, shouting “we hope they die.” The Sheriff’s department issued a warning via Twitter telling the demonstrators not to block the 7 entrances and exits to the facility, saying, “People’s lives are at stake when ambulances can’t get through.” The two officers, a 31-year old female and a 24-year old male who have only served 14-months on the job, are out of surgery at St. Francis Medical Center located in Lynwood, but still in serious condition.

Two protesters were arrested outside the hospital, including a local reporter who did not have her press pass with her, and charged with resisting arrest. On Sunday, Los Angeles Mayor Eric Garcetti condemned the unprovoked ambush and the subsequent protests calling both “abhorrent.” As of Monday, the shooter remains at large. There is currently a $100,000 reward for information leading to an arrest and conviction.