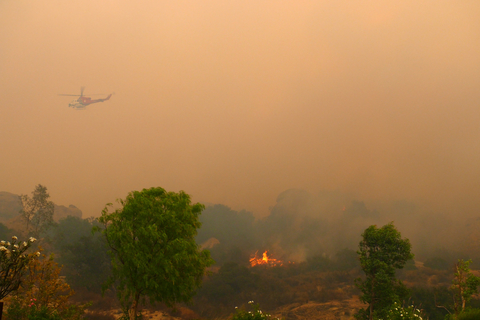 Nearly 17,000 firefighters in California continue to battle massive blazes across the state. As of Sunday, 29 deadly wildfires remain burning and have destroyed an historic 3.3 million acres so far this year. As extreme dry weather fueled by record-breaking heat and high winds continues to ravage the west coast, firefighters are also up against steep terrain in some areas, making it difficult to reach with the proper fire fighting equipment and vehicles.

California has seen at least 35 deaths from the uncontrollable blazes, with the North Complex blaze in Butte County being among the most widespread and claiming at least 14 lives. As of Sunday, 181 missing persons reports had been filed with the county Sheriff’s office, with 160 now accounted for. Department officials are in search of those who remain missing. By Monday, the blaze which had scorched nearly 262,000 acres was around 26% contained. Over 400 structures have been destroyed with many residents fleeing for their lives as the fires have consumed over 250 homes and damaged many other buildings.

Red flag warnings are currently in effect for the northern interior and northeastern parts of the state due to an unfavorable weather forecast of dry heat with no rain in sight and winds of up to 40 mph. Smoke-filled skies are causing dangerous air quality alerts throughout many parts of the state and power is being shut off in certain parts in an effort to prevent further wildfire ignitions.