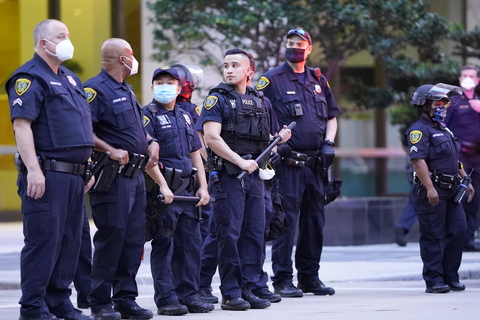 Four Houston Texas police officers have been arrested and removed from duty, facing charges for the April 21 fatal shooting of a man who was in a state of emotional distress at the time.

Bodycam footage shows 27-year old Nicholas Chavez lying on the ground incapacitated after officers shot rounds of bean bags and taser cartridges to subdue him. Fifteen minutes into the altercation, the officers fired a total of 21 shots killing Chavez.

Video footage shows Chavez crawling along the ground tugging at the wires which were attached to the taser cartridges. An officer can be heard ordering him not to do it just moments before what Houston Chief of Police Art Acevedo referred to as an “unreasonable” barrage of deadly rounds.

The officers claim Chavez was armed with an unidentified metal object, despite the fact that Chavez was already down on the ground and unable to move when 21 rounds fired by four officers killed him instantly.

Investigators in the case have determined the officers used unreasonable lethal force since Chavez, who was in a state of mental distress, was no longer posing any type of threat. The officers stated they were unaware the stun gun Chavez had reeled towards himself was empty.

Chief Acevedo stated the officers had ample opportunity to back away from Chavez, and that he cannot defend the officers for choosing to fire 21 fatal rounds into a man who was surrounded by 28 officers and no longer posing a threat.