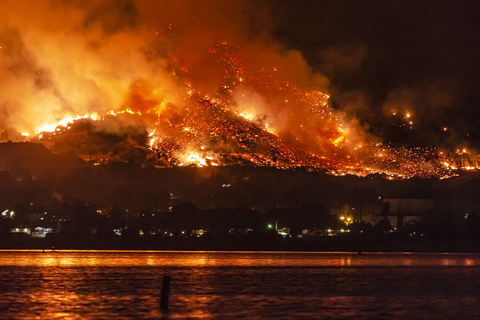 The western US is battling an incomparable wildfire season of epic proportions. Eight states including California, Idaho, Oregon, Washington, Utah, Colorado, Nevada and Arizona are under severe fire risk and danger warnings. As tens of thousands of firefighters battle the horrendous blazes fueled by dry land, heat and strong winds, seven people have died and many thousands are being evacuated.

Images of shocking haze filled orange and red skies are circulating on social media from the San Francisco Bay Area and other areas along the coast with #apocalyptic, where fog has combined with fiery smoke to create an atmosphere some are comparing to the color of Mars – as ashes drop from the sky like fiery snowflakes. The smoke was so intense on Wednesday, it completely obscured the sun and elevated air quality alerts are being issued in both the northern and southern parts of the state where airborne particulate matter is at dangerously high levels.

At one point, wildfires were moving so quickly through a neighborhood in Malden, Washington, fire fighters were driving down the streets yelling for people to get out immediately. In Colorado, a 100,000-acre inferno was slowed down by a freak snowstorm – a rare occurrence for September. Hundreds of homes have been destroyed in Oregon where one person died.

Expert weather analysts are saying the cause of these unprecedented firestorms are due in part due to adverse climate change conditions related to global warming.