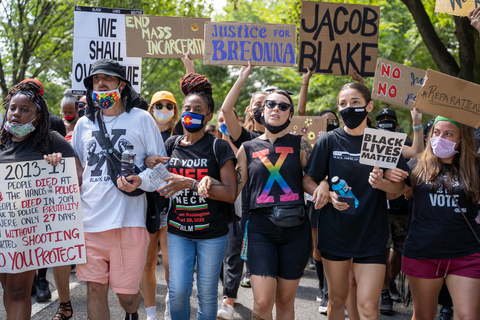 Recovering from multiple gunshot wounds inflicted by Kenosha police last month in Wisconsin, Jacob Blake spoke to the public for the first time in a video statement recorded from his hospital bed. Blake, who was shot seven times in the back, is now paralyzed from the waist down as a result of the injuries he sustained from being shot at close range.

In the one-minute video, posted on social media by his attorney Ben Crump, Blake spoke of being in “nothing but pain.” He said it hurts to breathe, to eat, to sleep and move from side to side. Blake, 29, addressed younger and older people “out there,” saying “there’s a lot more life to live” and “your life, and not only just your life, your legs… can be taken from you like this, man,” as he snapped his fingers. He spoke of 24-hour pain and the multiple parts of his body which are now full of staples. He implored people to “stick together” and “change our lives out there.”

A spokesperson for the Blake family said it’s unlikely he will ever walk again as a result of his August 23 injuries at the hands of a Kenosha Wisconsin police officer who was captured on video with another officer following Jacob Blake to his SUV where seven shots were fired into his back in front of his three young sons who witnessed the shooting from inside the vehicle.