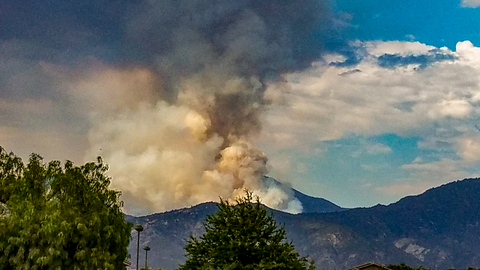 According to California fire officials, more than 8,600 acres are burning in San Bernardino County after a gender reveal party goer ignited a massive wildfire with a “smoke-generating pyrotechnic device” on Saturday morning. The fire began in Yucaipa on the Eldorado Park Ranch and quickly spread north along the Yucaipa Ridge.

Video captured by surveillance cameras shows a couple with several children walking in the dry grass in an area located at the edge of the park. Soon after a person is seen igniting the device. The video, which has not been released due to an ongoing investigation, reportedly shows the family frantically scrambling to gather water bottles as the flames quickly spread.

California Fire Investigator Captain Bennett Milloy issued a statement expressing how sad the tragedy is of what was supposed to be a day of celebration. He further added more than 80% of fires are started by humans and those responsible for this fire could be held legally and criminally liable. He also said this is the time of year when people frequent the park to take photos as the wild grasses dry to a golden hue, making for a scenic backdrop – but is also a recipe for disaster since the dry grass tinder can easily turn into a rapidly moving blaze.

Milloy said if the D.A. pursues charges, the person who ignited the device could face several violations including arson and “igniting the land” – which could be charged as either felonies or misdemeanors depending on the outcome of the investigation.