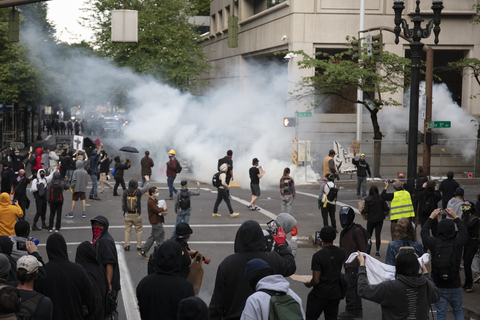 Michael Forest Reinoechi was killed on Thursday night while police were attempting to arrest him for the alleged shooting death of right-wing supporter Aaron ‘Jay’ Danielson during clashes between protest groups in the city of Portland, Oregon, on August 29. US Marshals had tracked the suspect to Olympia, Washington, where an attempt to apprehend him led to the task force opening fire and killing him.

Prior to fleeing the city, Reinoechi gave an interview with Donovan Farley, a freelance journalist, which was broadcast by Vice News on Thursday. He stated he had gone downtown on Saturday night when he saw reports of hundreds of Trump supporters in vehicle caravans parading through the downtown area of the city.

Reinoechi, a self-described anti-fascist, though not affiliated with any group, said he felt the need to provide “security” and also felt justified in the shooting which he said was in self-defense to protect himself and his “friend of color” who were allegedly being threatened by Danielson at knife point. He further stated he truly believes if he had not acted, he and his friend would have been killed. Danielson, who was shot in the chest during the altercation, died at the scene.

Reinoechi’s interview, which aired while authorities were en route to apprehend him, concluded by saying he chose to speak out because there’s “a lot of propaganda put out there” and demonstrators have been portrayed as “terrorists” as well as making him out to be a “murderer.”