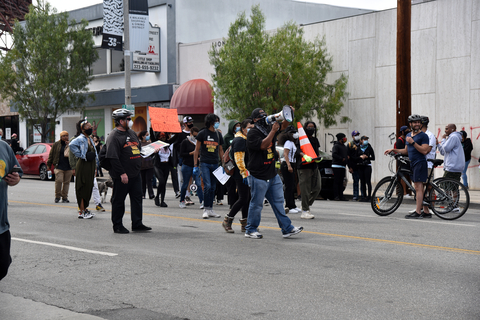 Protesters gathered in the South Los Angeles neighborhood of Westmont on Monday following another fatal shooting of a Black man at the hands of police. 29-year old Dijon Kizzee was riding his bicycle around 3:15 pm when two deputy sheriffs began pursuit for alleged vehicle code violations. When they reached Kizzee, he dropped the bicycle and took off on foot. As deputies closed in, Kizzee reportedly dropped a bundle of clothing he had taken from his bicycle and punched one of the officers in the face. The officers spotted a hand gun on the ground among the clothing and opened fire shooting as many as 20 rounds killing Mr. Kizzee instantly.

A nearby witness, 18-year old Gerardo De La Torre, was at home when he heard at least ten shots and screams. He stepped outside and saw a group confronting the deputies. De La Torre stated, five minutes later 12 squad cars were surrounding the scene where Kizzee lay dead in the street. Neighborhood residents gathered at the scene along with Black Lives Matter protesters questioning why the officers shot and killed an unarmed man since the gun was on the ground.

According to a statement issued by Sheriff Department Lieutenant Brandon Dean, it’s unclear what codes the man was allegedly violating. Dean further stated the investigation is ongoing and the officers have not yet been interviewed. Neither of the deputies were wearing surveillance cameras at the time which, unlike LAPD, will not be standard issue equipment until October. It’s unclear if any residential or cellphone video may have been recorded.