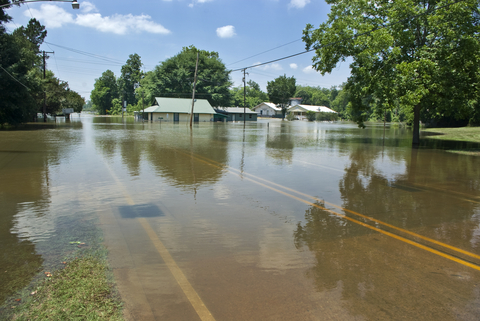 In what’s being called one of the most powerful storms in US history, Hurricane Laura, which made landfall in southern Louisiana near the Texas border around 1 am CDT on Thursday, was downgraded to a tropical depression as it moved north into Arkansas after leaving utter destruction in its wake. The storm, which pummeled the area for 11-hours, is responsible for causing six deaths in Louisiana – four of the victims reportedly died from falling trees. Damaging winds, flooding and pounding surf caused massive destruction as the storm moved inland flattening homes, ripping off roofs and destroying buildings.

Lake Charles, located 30-miles north of the coast, sustained widespread structural damage from the fierce winds, leaving houses and buildings with torn roofs, broken windows, and some homes completely gone – having been reduced to rubble. Fallen trees, utility poles and wires were left in a twisted mess along with overturned cars. As of Friday morning, more than 1500 search and rescue team personnel with 400 high-water vehicles and boats are being deployed to the hardest hit areas. It’s reported that hundreds of thousands between Louisiana and Texas are without power or running water. Tornadoes are still threatening areas to the north as the storm turns eastward towards the Tennessee and Ohio Valley’s.