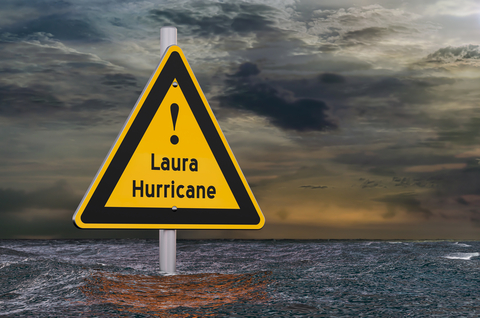 As forecasters predicted, Hurricane Laura made landfall as a Category 4 battering the Louisiana coastline early Thursday morning with 150 mile an hour winds, in what weather experts are calling the most powerful storm in more than a century. Hard hit Cameron Parish was given mandatory evacuation orders, but 150 of the 6,500 residents refused to leave, barricading themselves in make shift shelters in their homes and cars. Officials have stated rescue efforts cannot commence until the danger of the storm surge has passed.

Residents who did not evacuate are being advised by local authorities to write their name, next of kin, and social security number on paper and put it in a plastic zipper bag in their pocket, fearing the worst but hoping for the best. The storm surge is expected to reach as far as 30-miles inland. Officials are warning it will be “un-survivable” for parts of low-lying Gulf Coast areas in Louisiana and Texas. After pounding the region, Laura has been downgraded to a Category 2 with 110 mile an hour sustained winds. Massive power outages are being reported, affecting as many as 400,000 residents. The storm is expected to further weaken today as it moves north towards Arkansas.