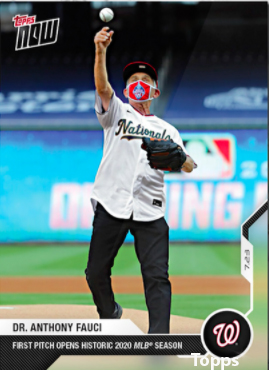 His ceremonial first pitch last Thursday at the Washington Nationals’ home opener may have been in the dirt and closer to first base than home plate, but that didn’t seem to matter to 51,500 people that bought his baseball card. In fact, the Dr. Anthony S. Fauci baseball card became the bestselling card in the history of ToppsNow, the trading card maker’s limited edition collection.

Fauci, the director of the National Institute of Allergy and Infectious Diseases, has been a major player in the United States’ response to the COVID-19 pandemic. He has served in this role since 1984 and was instrumental in curbing the HIV/AIDS epidemic. A dedicated Washington Nationals fan often seen wearing a mask with the team’s logo on it, he was given the honor of opening the 2020 baseball season.