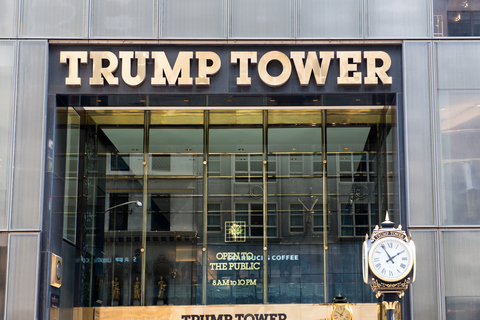 New York City Mayor, Bill De Blasio, closed Fifth Avenue in front of Trump Tower in Manhattan yesterday, and joined the protesters by helping volunteers paint “BLACK LIVES MATTER” in bold bright yellow letters on the street in front of Trump’s former luxury residence. De Blasio, who wants to send a clear message to the President, ignored the outnumbered critics who hurled insults from the sidewalk as he painted the letter “L.” Onlooking protesters chanted, “no justice, no peace,” as the volunteers, including Reverend Al Sharpton, used rollers and hundreds of gallons of bright yellow paint to complete the permanent design. The mayor has also stated the “BLACK LIVES MATTER” mural will be painted in all five New York City Boroughs. Trump tweeted last week the mural is a “symbol of hate,” and “would denigrate this luxury avenue.” De Blasio responded that black people built much of our nation, including Fifth Avenue, and this is “our way of honoring them.”