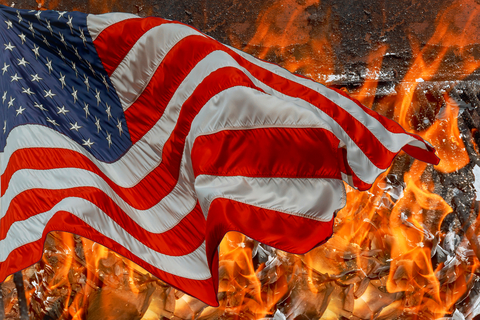 Following President Trumps Fourth of July address from the White House, protesters took to the streets burning American flags in Black Lives Matter Plaza in D.C. and in front of Trump Tower in New York. In his speech to the nation, Trump referred to protesters who have been defacing and tearing down national Confederate monuments as “Nazi’s and terrorists.” This came just one day after Trump announced a threat of up to ten years in jail for people who deface or damage the statues. A day earlier, a group of demonstrators tore down a Christopher Columbus statue in Baltimore and hurled it into the Inner Harbor. Police on the scene stood by and did not interfere. Meanwhile, protesters in New York City burned a flag outside Trump Tower. As the flags were burning, protesters were heard chanting about genocide, slavery and war, and “America was never great.”