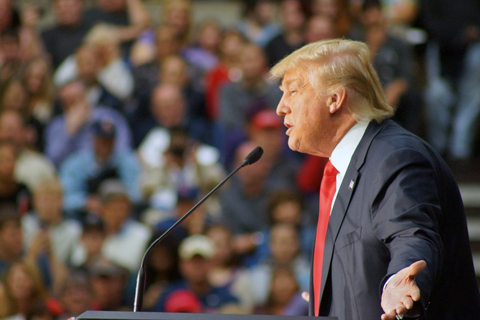 President Trump held a rally on Tuesday in Phoenix, Arizona, a state he’s courting for the much needed 11 electoral votes, and also seeing among the highest spikes in the coronavirus. Trump spoke to a group of mostly mask-less students at the mega church, reiterating continuing to build the border wall, despite the fact that his original campaign promise that Mexico would pay for it has failed. Most of the $15 billion funding for the wall has come primarily from government and military resources. Arizona’s young Latino’s now comprise 24 percent of the eligible voting population in the state. Trump also expressed his opinion on voter fraud, as the students booed at the mention of mail-in ballots. Other points Trump touched on in his 90-minute rally included his disdain for protestors tearing down Confederacy monuments, reinventing his 2016 campaign chant “Lock em up,” as well as shutting down worker visas and denying entry to more than 500,000 immigrants for a year