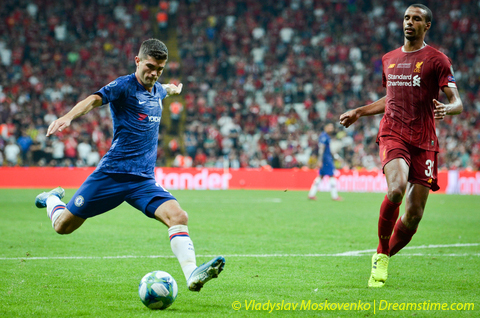 Everton and top of the table Liverpool clashed at Goodison Park on Sunday, battling to a 0-0 draw in the Merseyside Derby.  By only taking a point, Liverpool will end up having to wait a little longer to their inevitable clinching of the Premier League title.

Chelsea downed Aston Villa 2-1.  While Aston Villa took a first half lead on a goal by Kourtney Hause in the 43rd minute, Christian Pulisic fired home in the 60th off a beautiful cross from captain César “Dave” Azpilicueta to level things.  Just minutes later, Azpilicueta found Olivier Giroud to go on top.

In other action, Watford got a stoppage-time equalizer from Craig Dawson to draw with third place Leicester City who had just taken a late lead with a goal from Ben Chilwell in the 90th minute.

Arsenal continued their rough form dropping their second match since the restart.  While Pepe got Arsenal off to a 1-0 lead, Brighton bounced back with goals from Lewis Dunk and Neal Maupay.